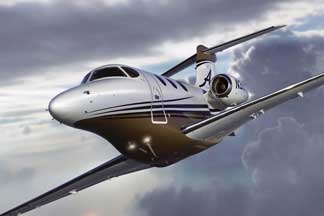 Design of the Premier I began early in 1994 under the designation PD-374 (PD for Preliminary Design), and development was authorized to continue early the following year. The aircraft was officially launched at the annual National Business Aviation Association Convention in September 1995 and construction of the first prototype commenced late in 1996.[3]

The Premier I prototype was rolled out on 19 August 1998 and its first flight was on 22 December 1998; four prototypes were used in the flight test program[3] and its FAA Type Certificate was issued on 23 March 2001. On 22 September 2005, the upgraded Premier IA was certified.