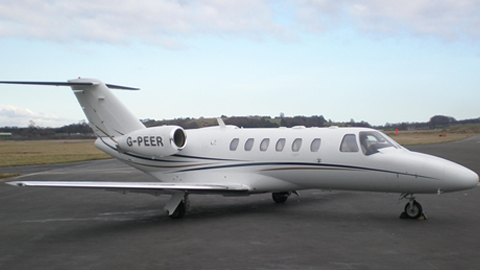 The CitationJet is a low-wing cantilever monoplane with retractable trailing-link tricycle landing gear, a pressurized cabin, a T-tail, and is powered by two Williams FJ44 turbofan engines that are pylon mounted on the rear fuselage. Basically an all new aircraft, the CitationJet used a modified version of the Citation’s forward fuselage, but with a new supercritical laminar flow wing, and a new T-tail configured tailplane. It features EFIS avionics and single pilot certification. The CitationJet’s fuselage is 11 inches (27 cm) shorter than the Citation I’s, but has a lowered center aisle for increased cabin height.